Today I want to talk to you about the results of the Jam!!

The game as you know, was made douring the Blackthornprod Game Jam

It's been a great experience for me to challenge myself douring this 7 days jam, to meet new people on the Discord server and to see what other developers are able to do in a week of work.

I've to say that I didn't expected so lot of work talking about the "art style"...I spent half of the time drawing and it was also my first experience using a drawing tablet and a drawing software (Krita) so it's been hard to do all but on the other hand, it was good to jump from coding to drawing because it is quite relaxing at the end.

Anyway from the 1000 suscribers to the Jam, were submitted around to 300 projects and in the 14 days of review I had time to play lot of them giving feedback and comments. I've also received some good comments from other devs. The comments result have lot of good pros like the great art style, the funny story, the nice music, the two endings...with a good overall. The cons are that it's hard to understand what to do for the one that skip the story and the high volume of a sound (I'm going to solve this problems soon :D).

Unfortunately some of the submitted project where all fake projects made by the same dev. that used them just to rate 1 star all tha games exept his one. In my case, I saw near to 20 ratings made in one day without comments (before there were near to 10 ratings and 10 comments). That was strange but happened quite the same to all of us with different ammount of fake ratings. So all the results were corrupted as you can see in the result section of the Jam and by the discord message posted by the Jam owner 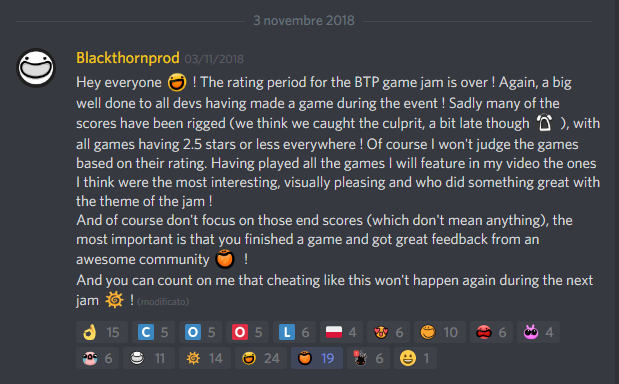 I'm happy to be part of this Jam anyway and thanks to all the devs that tryied my game and left a comment because it's the only objectve way to understand how good the game was at that point.

In the future I'll try to polish the game a little bit more to avoid the cons mentioned before and add few things that can help to enjoy the game more.

Have a nice day you all

Get Luis - A game developer story

A little game inside an interactive story that tells about Luis, a game developer